An Artist's Dilemma: How to portray a Native American

An artist must be able to portray phenotypes in portraiture, especially in sculpture, painting, illustration and caricature.  Since this is my profession, I have been a keen observer of nuances in facial structures, body types and skin colors. Similar to a dentist who observes teeth upon a first encounters; I notice facial bone structure, eye and mouth shape, skin texture and color. However, Amerindian identity is so mired in mythology that accurate phonotypical portrayal in the visual arts is problematic. More confusion to the issue of Native identity was added by the Federal Government’s “blood quantum” rule in 1934. This rule was inspired by the racist “1705 [English law] when Virginia adopted laws that limited colonial civil rights of Native Americans and persons of half or more Native American ancestry”. -- Professor Jack D. Forbes (2008). "THE BLOOD GROWS THINNER: BLOOD QUANTUM, PART 2". University of California-Davis.

Five hundred years of racial mixing in this hemisphere has created a category of human beings that have varying physical features some of whom choose to accept or ignore their Amerindian genes. Throughout the Americas, identifying with the indigenous has continued to be controversial. Peoples of the Americas are often ignorant about Amerindian cultural and historical achievements. Little is taught about the hemisphere that produced pyramids, large cities, empires, multitude of medicines and is the source of 60% of what humans eat. Yet, against some remaining obstacles, there has been resurgence in Native pride. Compounding the problem of identity are the labels Mestizo, Métis, Latino, Hispanic, Chicano, Black Indian, etc.

Some newly formed tribes handle the issue of resurgence well, while others create havoc in trying to be “more Indian” than the rest. One example of this extremism is the group’s attempt at historical revisionism by usually stating that “We are the Indians” of a geographical location on which their tribal name never historically appeared. This con-game was also played out by the late Italian-American actor “Iron Eyes Cody”.  Hollywood Westerns of an earlier period played a pivotal role in this confusing sham by casting Italian, Middle Easterner, English and Irish actors as Indians.

Notwithstanding Columbus’ confusion; the answer to who is “Native” is not cast in stone. For example, a Mexican (even with a high percentage of Amerindian DNA) would say that unless you speak your language, you are not Indio. In North America the answer to this question is more fluid. 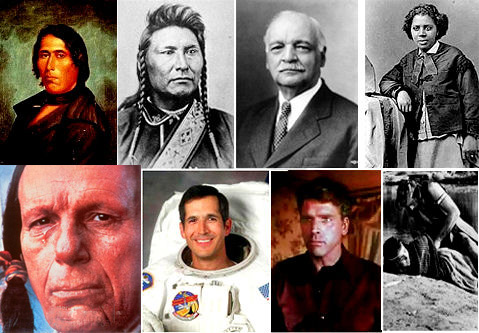 Top Row:  (1) Tecumseh, leader of the Shawnee. (2) Chief Joseph, Nez Perce [Nimíipuu is their name for themselves].
(3) Charles Curtis, 31st Vice President of the  who had maternal grandparents on the Kaw reservation.
(4) Noted sculptor Edmonia Lewis whose father was black and mother an Ojibwa Indian who named her Wildfire. She grew up with her mother’s family of basket makers on the reservation. Both African and Native Americans claim her.

Native American  n. (1) Aboriginal American. a member of the indigenous people of the Americas, belonging to the Mongoloid group of peoples. (2) adj. relating to any of the indigenous American peoples, their languages, or their cultures. Encarta World English Dictionary

Pardo n. American Spanish. A person who is mixed with Amerindian, European and African.

Except for the last two pictures of Burt Lancaster and Iron Eyes Cody, the above images are of people whom some Indian tribes would call Native Americans today.  Although, in the United States, we often reserve the term Native American for only the indigenous people of the mainland USA.  This attitude has caused many legal and “illegal aliens” from south of the border to insist that they too are Native Americans.  According to some anthropologists, we can evaluate the survival of indigenous populations in the  since 1492 in two ways.  Either, (1) Disease and genocide drastically reduced the Americas’ multimillion indigenous populations. Or, (2) Racial mixing has greatly increased the numbers of indigenous people within the since 1492.

The second theory, however, has contributed to a Native American identity dilemma for people without and within those ethnic groupings.  It is also difficult to identify Native American phenotypes especially in states with a high percentage of American Indians and Mexicans.  For example in , I found it hard to make a visual distinction between both populations.  Although most Mexicans are from the same indigenous genetic pool as other Native Americans, in  there were incidents of animosity between both groups.  This dilemma caused a prominent Native American artist in another locale whose son had been beaten up by Mexican youths, to state, “Why would they beat up my son?  Don’t they know that Mexicans are also Indians?” East of the , the ability to identify who is an Indian is even more difficult.

The Native American identity problem began after 1492 when Columbus believed that the Caribbean’s Taíno and Island Carib were the Indians from Asia’s subcontinent.  Although there is documentation that indigenous Americans had been arriving on European shores at least since the , their sustained impact on the rest of the world began in earnest in 1492.  According to Dr. Jack D. Forbes, author of The American Discovery of Europe, “What we do know is that two or more Americans, at least a man and a woman, reached Galway Bay, Ireland, [in two dugout logs] and there seen by Christoforo Colomb (Columbus) long prior [around 1477] to his famous voyage of 1492.”  Dugout canoes are from the east coast North America, South America and the  so it is unclear exactly from whence these Americans came.  It is believed that indigenous Americans either came east to  at varying times via their own volition and/or were hijacked by Atlantic storms.  Oceanic tempests and Atlantic currents had floated American trees into  where there was once a local business in American driftwood lumber. Today, heavy Atlantic shipwrecks still end up on ’s coast.  Descriptions of people arriving at various times from the west going eastward, both dead and alive, matched the phenotypes of various indigenous Americans.  At that time, it was very unlikely for people from Asia to have been blown ashore on Western Europe and the .  In Europe, they were mistaken for people from “Catayo” or Cathay (meaning ), and .  Later, Columbus’ encounter with the people of the Lucaya Bahamas convinced him that they were Indians from Asia’s subcontinent.

It is obvious to the casual observer that the Inuit (“Eskimo”) are decidedly different in appearance from the Olmec and Maya of the Yucatan, or the Cherokee, Iroquois and Algonquians of North America’s Eastern Woodlands.  The pre-Columbian  diversity in skin color, hair texture, facial and physical composition varied greatly among peoples of the Americas.  Even in two isolated and recently contacted Amazon tribes phenotype decidedly differed.  One group was tall, slender and yellowish (the Zo'e) wearing lip plugs; while the other was shorter, muscular, brown skinned and
seemed not knowing how to make fire.  Although many people believe that Native Americans belong to one monolithic “race”, DNA studies tell us differently.  Geneticists trace all indigenous Americans back to six “original mothers”.

Who is a Native?

The answer to this question lies in how the sovereign tribes of the  and the Bureau of Indian Affairs (BIA) define a Native American.  First, tribes have varying criteria for membership that range from ½ to 1/16 “Indian blood” (See the July 22 blog article on “Blood Quantum”).  Tribes themselves define who is eligible for membership in the Native American family. Similar to loosing American citizenship, tribes can excommunicate blood members for reasons that go against the American Constitution. Federally recognized tribes are sovereign nations.

Second, in a case brought before the BIA, a man in North Carolina tried to discredit his wife who identified herself as a Native American by calling her a Negro (since she was mixed).  The federal agency replied to his charge.  In their response, the BIA stated in essence that they did not care about the other racial composition of a Native American.  Although many Americans harp on the notion of the authenticity of “full bloods”, there are both tribal and federal acceptances of the multiracial composition of individuals who call themselves Native Americans.  This self-identification factor in sovereign “Indian Country” confuses the average American.   further muddied the issue by painting Italian, Irish and Jewish actors brown (such as Jeff Chandler, Burt Lancaster, Audrey Hepburn, Paul Newman and others) while casting them in leading roles as either Native American full bloods or “half breeds”.  A founding member of a District of Columbian indigenous American organization once told me that a person who wants to identify as a Native American, regardless of blood quantum, must be publicly acknowledged as a Native American by members of both the Indian and non-Indian community.

The Crossover
From the time of 17th century ,  up to today’s Vice-Presidential nominee Governor Palin’s , Native Americans populations continue to be both hated and expendable.  The English from  went out twice yearly to kill Powhatan men, women and children in attempts of early ethnic cleansing.  This practice caused some Virginia Indian families to go underground and as they say, “hide in plain sight”.  Also, societal, economic and peer pressures have caused many Native Americans to identify themselves as black or white.  In spite of gaming windfalls, Native Americans are still on the lowest end of the American society’s economic and health ladder.  In some parts of Virginia and , Indians were forced to be reclassified as colored, mulatto, Negro, and later black.  They were threatened with physical violence or loss of their jobs if they publicly acknowledged their Indian heritage.  Some lighter skinned descendants of these Native American families moved out West into the Sun Belt to pass as tanned whites.  Since it has become safer to identify with one’s Native roots in recent years, some of these family members have now enrolled in Native American tribes.  Historically, many Native American families from the times of the Southern plantation system could only live in black neighborhoods.  Dr. Walter Plecker, an avowed white supremacist and advocate of eugenics compounded the case against Native American identity by fiercely recommending the enforcement (by incarceration) of ’s Racial Integrity Act of March 20, 1924.

A Washingtonian relative in her 80s told me of the case of Sacagawea H. a Delaware Indian childhood friend whose family owned a store in D.C.’s , who committed suicide.  Attempts to identify herself as a Native American in  met with typical skepticism.  My source said that as proof of her Native American ancestry, “The chief of a  tribe attended her funeral.”  Another story is of a  woman who was denied a federal job for “lying” on an employment form by stating in the “Race” category that she was an Indian.  Also, consider the case of a prominent  gallery owner who identifies herself as black.  Her full-blooded Indian parents had escaped with their lives from the persecution of Cherokees in the South.  They were spirited away to the North by a sympathetic sea captain.  They could only live in an African-American community in .  Or the saga of prominent sisters from the Cherokee Reservation in  who were misidentified as attractive “Negroes” in black entrepreneurial ’s early corridor.  Maybe someone should write an Oscar awarding song titled “It is hard out here to be an Indian.”
Posted by Unknown at 4:32 PM